Starting this 2017-2018 school year, St Paul Public Schools has said down with Styrofoam! While most schools use reusable trays on a daily basis, sometimes Styrofoam gets used. These trays can be collected in the new Compost Organics Program, there is no need to have a seperate Blue Bags Program anymore! the District will only use compostable trays in lieu of reuseable on days when disposable trays are necessary. 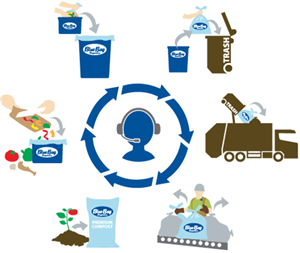 Furthermore, the compostable trays are made from a natural paper pulp that overtime decompose - making a full circle from beginning to end rather than producing excess waste. The trays are collected in Blue Bags that are specially designed to break down when in a commercial compost facility. You know what the coolest part of this is? The Blue Bags can be placed into the trash dumpster, no separate container necessary! The Blue Bags are sorted out from the trash and are later transported to a compost facility.